With ancient grapes from over 6,000 years ago, Armenian wines might be historic, but they are now becoming hip as well, thanks to New York native and co-founder of Storica Wines, Zack Armen. Despite being born and raised in the US, Armen was brought up to feel closely connected to his family’s Armenian culture. That familial feeling was forged even more while attending Armenian camps as a kid, and Zack eventually started a fund with his father to help children in the rural areas of the country. 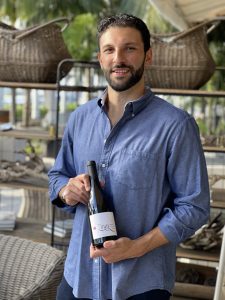 Upon visiting his ancestral homeland over the years, Armen realized he didn’t just enjoy experiencing Armenian culture, but also tasting it. “During a trip to Armenia in 2017, I noticed that there was a lot of wine from all over the country, and it was really good,” explains Armen. “There was a burgeoning scene of wine bars serving Armenian wines and the government was really supporting the industry surrounding these wines. I noticed that winemakers of Armenian descent were coming into the country from around the world and that really got me intrigued.”

During his trips, Armen also wound-up meeting Vahe Keushguerian and his daughter Aimee who have been the real leaders of this resurgence. Keushguerian had gained a decade of experience creating wines in both Italy and France, including the famed Champagne region. According to this winemaking connoisseur, Armenia is the perfect mix of climate, precipitation, and elevation of vineyards, making it the newest wine wonder of the world. Armen was greatly impressed with how things were progressing and spent a lot of time with Vahe in order to understand why there was hardly any history of Armenian winemaking in modern times.

“Armenia was a soviet satellite county for most of 1900s during which time there was no fine winemaking in Armenia,” says Armen. “The region, which is truly experiencing a wine renaissance, has mostly been known throughout its history for high-quality brandy. Vahe, as well as other winemakers, rediscovered all of the indigenous wine grapes. They also discovered plenty of evidence that suggested that these grapes have been growing for over 6,000 years in the region. They have since brought back vines that had survived the Soviet period and now have modern tanks and barrels and processing equipment to allow for this fine winemaking to occur. Before getting started at Storica, there was no comprehensive approach to bringing the wines here. Due to geopolitical factors and not being a free enterprise for people to invest, their standards have risen dramatically over five to ten years on a scale that now makes sense to bring these varieties to the United States.”

With a strong desire to bring the rich taste of Armenia to America one sip at a time, Storica Wines is on a mission to build a U.S. based company with an experienced sales marketing and distribution team. Now that they are on the scene, Storica Wines is certainly leading the movement of educating others about the unique wine growing abilities of Armenia. Storica’s distribution of Armenian wines story is currently on a chapter focused on owning US national rights to six brands that they currently work with to sell to distributors who are then licensed to sell in certain states. Most of their distributors send the product to shops and restaurants as well as retail chains. “Our wine team is made up of a regional manager who maintains a relationship with distributors. We currently have 12 distributors, soon to be 14, and are getting two new ones across 20 states. Our team is now spread across New York, Boston, Los Angeles and Florida who are managing those distributors. We are also working on expanding our online sales infrastructure.”

While this past year was one of expansion, Storica is already looking towards the next steps of their successful journey. The current goal of this passionate brand which now has boots on the ground in each market they work in, is to expand their presence to 20 plus states. First on the agenda for further distribution is gearing up with a larger distributor with a broad range of stores and restaurants in Florida which has a booming wine market.

“We’re hoping to have more restaurants attracted to this portfolio by the end of this year and are focused on getting into 30 states as well as all of the metro markets around the country in order to grow our sales value. The wines are doing really well in other markets, so we see a huge upside in being available in these larger areas due to the population. Southern California has a large population of the diaspora of Armenian Americans, so we definitely foresee being able to reach a lot of people out there. I just hope that people embrace the wines and the story. The reaction from consumers as well as sommeliers and masters of the wine world has already been incredible.”

Zack’s Storica Wines is also dedicated to driving future economic development for Armenia and its wines, which is why they will be taking contingencies of key stakeholders including large hospitality groups, chains, and other large buyers to his homeland this year. “I want to bring them around to the wine regions and have them meet with the wine makers and get a firsthand look and feel of everything. We’re building a new category of these wines in the U.S.”

In addition to the passion he has for sharing the winemaking story of his cultural background, Zack also has a background in finance. Having worked on Wall Street, he is able to merge both of these interests and has remained diligent about financial projections and managing the company’s cash flow. This knowledge is able to help him articulate the exact projection of this now very profitable passion project. The company’s main investors include his father and investments from angel investors as well as external investors who truly believe in their story and of course, the real potential of their investment. This energetic entrepreneur and his team are also gearing up to launch a new financing round within the next few months in order to bring in additional funds.

The brand’s current palatable portfolio is made up of a diverse array of high-quality and mostly affordable wines, though they also offer the rarer, uber premium varieties for connoisseurs. The grapes – and potential for growth – are both ripe for Storica’s unlimited growth potential itself. They currently have six brands and 15 products with the goal of capping out at ten brands and up to 30 products over the next few years. Their strategy of the moment is to focus on building their presence and followers, and with the majority of the wines priced in the $15 to $20 price range, they are indeed able to offer varieties which are attractive to the American palette, while also differentiating themselves.

Right now the red grapes of Armenia – similar to those of a pinot noir – are all the rage – just try their fruity notes and cherry flavors and find out why. Enjoy the structure and dryness of this blend which is due to the elevation of the vineyards between 1200 and 1800 feet above sea level. This makes for a more complex profile and big structure of a cabernet, almost like a marriage between a sauvignon and pinot noir, both varieties which Americans know well, making them accessible as well as unique enough at the same time. With a dry and complex flavor, their white wines have an aroma similar to a chardonnay. There is even more good news for lovers of these A-list Armenian wines – additional grapes are in the process of being discovered and are ramping up their scale.

According to Armen, perhaps the most important aspect of Storica’s success is their stellar team. “It’s because of them that we can do what we do,” explains Armen. “They’re passionate about what it takes to make it in the most competitive wine market in the world and I love to see how they have embraced this project and our mission to bring this to the US.” Storica’s Director of Strategic Development, Lisa Granik, MW has spent a great deal of time with the team, providing support and guidance throughout each department, focusing especially on the company’s new distribution expansion in Florida. “She is incredibly knowledgeable about the wine industry and it’s an honor to have someone with her credentials and experience recognizing and embracing Armenian wines. This has been such a fun project and it’s a true pleasure to have this team who are all so pleasant to work with so it’s been an incredible journey already.