by Hillary Latos
in Interviews
0

In business school, there are countless case studies about the first mover’s advantage, which in hindsight proves the theory to be true.  But what you don’t learn is the how and why, and what is behind the founder’s passion and vision to put them on a trajectory for success.  This ability to recognize the potential of the market opportunities and identify the future first movers is an innate talent that serial startup investor Todd Ruppert possesses.  With over 40 years of experience in the financial industry, Ruppert was formerly the CEO and President of T. Rowe Price Global Investment Services, and was also a venture partner of Greenspring Associates, a $14 billion VC firm.  This experience of being vested in the equity and venture side has given him the acuity to spot highly lucrative investment opportunities in a global marketplace.   Ruppert’s secret to success lies in following his personal interests in various fields with numerous investments located around the globe in arts and entertainment, fintech, disruptive technologies, education, and impact investing. Here he shares his insights on some of his activities. 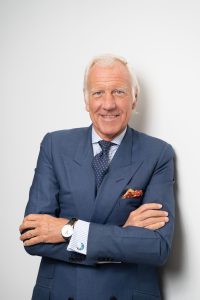 What are some of the areas you are invested in?

FinTech is really what I grew up with and I’m an investor, advisor and board member to FinTech companies all over the globe.  I’m invested in a lot of different areas, whether it’s infrastructure, payments, insurance tech or roboadvisors, etc. it’s across the board.  I just went on the board of Rocket Dollar that just made an announcement a couple of days ago about another funding round.  Rocket Dollar enables individuals to invest their self-directed IRAs in alternative investments. I’m also on. the board of Symbiont, which is a smart contracts blockchain company that works with the asset management industry. Another is Bite Investments, a technology platform providing access to a diversified selection of alternative assets. There are many more. Over the last year I have been doing more in Africa in digital banking and open finance. I look for company founders that are intellectually gifted, have street smarts,  and have the leadership qualities to turn a team’s talents into durable value for customers. I also look for founders that meet the four H’s – hungry, humble, honest, and with heart. It’s really a combination of a strong founder or founders and a large, expanding market opportunity.

You are also diversified into artistic fields such as entertainment, is that more of a passion play?

I really enjoy the arts and entertainment industries, and there are attractive investment opportunities.  I cofounded a company in 2013 called Iconic Images where we acquire the intellectual property rights of photographers. It’s an interesting business. I’m on the board of The Fine Art Group, which is one of the largest independent art lending, brokerage, valuation, advisory and appraisal companies in the world.

I’m on the board of a company called Hit Lab in Montreal, which is doing a global digital emerging artists showcase. I’m also an advisor to a private equity firm called BroadLight Capital which is working in the entertainment, technology, and consumer space. I’m also an investor in London and LA based Flawless.  It’s neural network driven filmmaking that is the world’s first system that uses Artificial Intelligence to create perfectly lip-synced visualizations in multiple languages.

Another start up company I’m excited about is called Molten, based in Cambridge, MA.  Their technology allows film and TV producers to move content and intellectual property around through the Molten system which is the nervous system that connects intellectual property on the internet. They match distributors and content producers from around the world while enabling them to outsource a lot of their back office, financing functions, and IP.  In just 18 months there are more than 200 million films and TV shows on their platform, which is about 5% of all the TV shows and films ever made.

I’m also on the board of the Rock and Roll Hall of Fame. And another thing that I’ve done is make three documentary movies- A Year in Champagne, A Year in Burgundy, and A Year in Port.  I’d never made a movie and I wanted to try which was a lot of fun and I learned a lot from the experience.

Which sectors do you think will have the biggest growth?

The global pandemic created a number of dynamics that have resulted in enormous digital acceleration and very meaningful tailwinds to disruptive, venture capital friendly sectors, such as workforce collaboration technology, tele-health, e-commerce, distance learning, e-gaming, enterprise productivity software, etc. These will continue to accelerate. I also see significant growth in quantum computing, AI, biometric screening, genomics, cyber security, and much more.  We are living in a golden age of innovation led by transformational technological advances that will impact every industry. It’s so exciting.

How do you like being on the venture side versus the buy side while at T. Rowe Price?

They are interlinked.  T. Rowe Price is a phenomenal organization which I’m so proud and honored to have had a good career with. While they are predominantly a long only stock and bond organization, the alternative investment space is another area of great interest to me. I like being involved with startup companies and scrappy entrepreneurs.

In addition to having been a venture partner at Greenspring, a terrific organization investing in funds, directly in companies and in secondaries of funds and companies, I’m on the board of another very fascinating venture capital firm called Antler. It has a global entrepreneurship program. This year there will be over 60,000 individuals that go through the program around the world.  From that group, less than 3% are selected to enter 12 week regional programs where individuals are matched together to create companies which are then presented to regional investment committees. A small percentage get funded, and since Antler’s money is the first money in with no competition, valuations are low. Further, almost 40% have a woman as one of the founders and a significant percentage are impact oriented companies.

I’m a fan of regulation and there is clearly a lot of regulation in the financial services sector but you also need to work deliberately with the regulators. There’s a company that I’m involved with right now that is like the Robinhood of Nigeria, called Trove.   It enables Nigerians a to invest outside of Africa to put money into stocks and bonds in the United States and elsewhere.  The central bank is creating some issues with them because they’re concerned that it’s causing capital flight from the country, so we are working with the regulators.

As an astute investor are there any sectors you would avoid now?

I wouldn’t be buying fixed income securities.   There are always going to be areas that are overvalued and undervalued, and you don’t know how long that is going to last. You need to have the conviction that you’re invested in companies and managements in markets that will have a positive long term trajectory. I’ve certainly made mistakes and a lot of people much smarter than I am have made mistakes. It’s important to be conscious of valuations, but I don’t think you need to be overly overridden by valuations. If that was the case, people would not have been in the venture capital industry over the years, and a lot of money has been made over the last couple of years.

What kind of impact investments are you involved with?

Many of the companies that I invest in I’m actively involved in helping their management teams, such as Marco Polo Learning, which has thousands of teaching lessons for children between the ages of three and seven on a handheld device that piqued interest during the pandemic.  Since its inception, I’ve also been involved with M Power Financing, which provides financing for non US citizens that are coming to the United States for education, but they can’t get a loan from a bank because they don’t have a FICO score.

I was also an early investor and advisor to one of the first robo advisors in the UK, Nutmeg, which was just acquired by JP Morgan, as well as in Seedrs, the first crowdfunding platform in Europe.  I like being involved with companies that are doing positive things for society whether it’s for humans or the environment.  I’m passionate about that.

Education is a mission driven impact oriented interest of mine.  I’m on the board of the INSEAD business school based in Fontainebleau, France, with campuses in Abu Dhabi and Singapore.  What I like about INSEAD is that no more than 10% of the incoming class can come from any one country and you have to be fluent in three languages.  It’s the most internationally diverse business school in the world and consistently ranked in the top five.

Giving back to cancer research is important to me and my wife as we have a child who’s a cancer survivor. Children are important. I’m also on the board for the International Center for Missing & Exploited Children.

Finally, I’m an investor in and advisor to Switzerland based GIST Impact. We all know that investors are increasingly interested in sustainability – the positive and negative impacts companies have on society and the environment. We also know that there has been an explosion of ESG ratings. However, ESG doesn’t measure actual impact. It’s more categorization and there is so much confusion and lack of standardization and transparency. GIST’s science based and data driven approach helps companies and investors quantify and better understand the degree of a company’s positive and negative impacts on natural, human, social, and financial capital. Its methodology is scientifically robust with commonality across all industries.  GIST is the next evolution of ESG. It gets to the heart of the matter – actual, quantifiable, measurable impact.

What are some of the life lessons you’ve learned during the pandemic?

First, we tend to take our health for granted.  We shouldn’t.  Second, many people got much more consumed with their work during this pandemic, and its addictive.  Since people traveled a lot less, they spent a lot more time looking inward and tried to figure out things that are important to them.  For me it made me realize that much of the travel that I did before, I didn’t need to do. I’ll still be traveling, but it’s not going to be to the same extent as before.  Finally, it was crystalized in me that extreme events in one direction can lead to extreme events in the other direction.  You must be very alert to take advantage of that.

Were there any mentors that really shaped your career?

Absolutely.  Ed Mathias who was one of the people running T. Rowe Price when I joined was a tremendous mentor to me, and like me he is also a serial investor.  One of the key things he said long ago is don’t focus on the inside, focus on the outside and network.

You know what? He was right.  Life is a contact sport and life is an improvisation, and it’s amazing the things that happen if you put yourself out there.