by Editors
in The Arts, Wealth
0

For as long as fine art has existed, thieves have sought to steal it. Though criminals have become increasingly sophisticated and capable of using digital methods to take down the computer systems of major companies, municipalities, and even central banks, they have kept the art world squarely in their predatory sights. Now, due to the pandemic and technological advancement, art deals are increasingly being conducted wholly or partially via online means. With this online shift, the methods of stealing art and money intended to buy it have multiplied, and so too has the importance of purchasing first party cyber insurance for Family Offices and commercial entities in the fine art space.

2020 saw numerous headlines detailing the continued legal fallout over a 2018 email spoofing scam that was used to fraudulently obtain a wire transfer of £2.4M intended for a painting by landscape great John Constable. This was no small fraud and making matters more worrisome, the parties involved, a London dealer and a Dutch museum, were by all accounts respected and legitimate organizations. Two major lessons from this incident are that reputable dealers and buyers are far from immune to fraud, and that there is a strong and growing need for cyber insurance to serve as a backstop to help recoup losses of parties impacted by electronic fraud involving art transactions.

The topic of art related cyber fraud also brings to mind the curious case of supposed art scion turned accused fraudster, Angela Gulbenkian, whose alleged actions serve as a human analogue to a well-run digital scam. Despite only marrying a distant relative of the prominent art collecting Gulbenkian family, she is accused of using her married name to pad her resume and present herself; quite successfully it would seem, as an art expert. 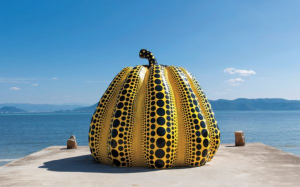 Ultimately, Ms. Gulbenkian’s masquerade as an art powerhouse ended like most masquerades: her mask was removed to reveal something quite different and far less elegant than what was initially presented. However, as with many fraud events, nearly everything checked out at first glance. Her last name was real and she apparently knew enough about art to talk the talk with those to whom she talked. Eventually, the façade began crashing down when Gulbenkian is alleged to have accepted payment of £1.1M for a Yayoi Kusama pumpkin sculpture, which she neither possessed nor had the authority to sell. Though there are ongoing legal cases against Gulbenkian, due to much of the negotiation for the piece having taken place via electronic means, first party cyber insurance could have paid out to help the Hong Kong-based victim of her fraud recoup his loss.

Aside from the large price tags involved, the Constable and Gulbenkian cases are similar to common online scams. Many, if not most, feature numerous signs of legitimacy. Yet, if one looks closely, and of equal importance knows what to look for, they may spot a single letter missing or added to an email address. Perhaps they will pick up the phone to call a seller and verify that emails with wire transfer instructions are accurate and legitimate. Often times, seemingly simple acts like spotting a minor detail or involving a disinterested third party to help authenticate a transaction can save thousands or millions of dollars, not to mention reputations.

Cyber insurance can fill the gap when preventative measures fail. With this in mind, it would be wise for all parties involved in major art transactions to require that proof of adequate first party cyber insurance be provided before agreeing to consummate a deal. Having enough cyber coverage in place for first party financial loss would allow for a smoother payback process in the event of fraud, rather than leaving costly litigation as the only remedy for an injured party.

Art fraud leaves in its wake a unique form of embarrassment that can only be experienced when one is fooled about a highbrow topic on which they consider themselves an expert. To avoid this feeling, preventative measures are of primary importance, and though cyber insurance cannot fully remedy a damaged reputation, it can be used in many cases to make whole those who find themselves the financial victims of art related cyber fraud. With this in mind, Commercial art entities, as well as ultra high net worth individuals and families with collections must develop preventative action plans and consider purchasing cyber insurance to protect their financial exposure to art fraud.