by Hillary Latos
in Philanthropy
0

In 1996, during his rookie season with the New York Yankees, Derek Jeter and his father, Dr. Charles Jeter, founded The Turn 2 Foundation to motivate young people to turn away from drugs and alcohol and “Turn 2” healthy lifestyles.  Twenty five years later, The Turn 2 Foundation has given back more than $30 Million and continues to build on that legacy by creating programs designed to foster leadership development, academic excellence, positive behavior and social change for hundreds of young people.  As a close knit family, Derek’s sister, Sharlee Jeter, is president of the Foundation and prides themselves on the fact that 75% of all money raised goes straight back into their programs and initiatives with only 25% going towards operating costs.

When Derek and his father started the Turn 2 Foundation, their programs were created to reflect who he is as a person, how he’s lived his life, and how important it’s been for him to be a role mode as a person and less of as an athlete.     Derek Jeter states, “When we created The Turn 2 Foundation in 1996, my hope was that we’d be able to make a positive impact in young peoples’ lives by motivating them to rise above negative influences and lead healthy lifestyles. Since then, Turn 2 has grown into something truly amazing that has exceeded my dreams when I was a rookie with the Yankees, and I’m so grateful for the support we’ve received over the years. Through our programs, we have been able to help thousands of young people excel both personally and academically, and ultimately recognize and achieve their fullest potential. Witnessing the transformation in the students we serve, and their passion and commitment to creating positive change, is what inspires me every day. As we celebrate 25 years, I’m looking forward to our next chapter. We are focused on strengthening Turn 2’s programs, deepening our impact, and providing more youth across the country with the tools, resources and guidance they need to serve as leaders in their communities and thrive.” – Derek Jeter, founder of The Turn 2 Foundation

Turn 2’s signature initiative is the Jeter’s Leaders program – a four-year leadership development program that fosters academic achievement, positive behavior and social change among high school students in New York City and Kalamazoo, Michigan who serve as ambassadors for Derek in their communities through a highly selective program that admits 40 students in each location.  Students begin as freshman and remain in the program throughout all four years of high school and serve as role models in their communities and are involved in programs that promote healthy lifestyles, serve their communities, and further their academic and professional development.  Every summer Turn 2 has a leadership conference which brings all of the students together.  Over the past 15 years, 100% of students in the program graduated high school and have been accepted into college. 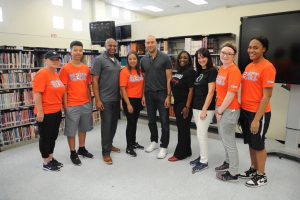 Jeter also recognized that leadership qualities can be fostered and nurtured at an even younger age.  Turn 2 Us is an elementary school-based mental health initiative for New York City students, created in partnership with NewYork-Presbyterian Hospital in 2001.  Their programs teach students mindfulness exercises, anti-bullying education, healthy lifestyles practices that promote mental well-being and academic success, and more.

With an impressive track record of creating the next generation of leaders and operating the foundation with minimal operating costs over the last quarter of a century Sharlee Jeter sheds some advice on creating and sustaining a family foundation.  “Get a really good team around you. When we first started out, the first thing my dad did was to bring different people on board who were good in different areas to donate their time, like a programming director, accountant, partner development.  He just really prided himself on having a lot of strong people that wanted to support what we were doing around us that can help us and realized that we didn’t have the answer to everything. Also, my dad always emphasized that we can be audited at any time, and he implemented a yearly audit that we did on our own to ensure everything is being done the proper way which is crucial for running a nonprofit.”

What is it like to work with one of the most successful athletes in the world, who just happens to be your brother?  Sharlee muses, “I do love it. It can be difficult at times because you have to separate your personal life from business. It’s very difficult because we work not just on our foundation, but also on his businesses as well, but we’ve always worked together as a family and have always been a very close family. I’ve learned a lot from the experience. I think that what we were able to do successfully as a family and with me working with him is knowing what our roles were and not overlapping too much, and he trusts me with that job role.  He allows me to do my job without trying to change things or to do things. He has a lot of input in what we do, but he trusts that I’m going to do my job well.  It hasn’t always been roses but we’ve worked well together over the years.”

As part of their annual fundraising efforts, on October 6th, The Turn 2 Foundation will celebrate its 25th anniversary during its Annual Dinner at Cipriani Wall Street. The Annual Dinner will raise significant funds to enable Turn 2 to provide more young people with the tools needed to create positive change, serve as leaders in their communities, and pursue healthy, successfully lives. To learn more about the Annual Dinner, please visit www.turn2foundation.org