by Angela Trostle
in Events
0

Closing out the Hamptons summer season is one of the highlights of the Labor Day Weekend- The Hampton Classic Grand Prix.  After a year hiatus, riders and Hamptonites were eager to return to the jumping ring to watch the week long competition which culminates in the prestigious Grand Prix competition on Sunday.  Seven of 23 riders returned to jump off for the blue on Sunday in the $300,000 LONGINES Hampton Classic Grand Prix Presented by Land Rover, and it was Israel’s Daniel Bluman who soared to victory with a blistering time of 34.750 seconds. 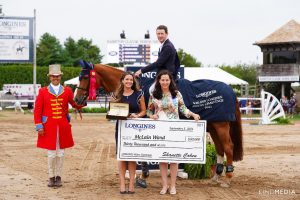 “I was watching everything McLain did carefully,” Bluman said. “He’s a fast rider, and he loves to win this class. Then the crowd went crazy when he finished, and I had so many emotions at that point. I just said to myself that I was going to give everything – absolutely everything – I had. I was going to take all the risks, and I was going to beat him. I wasn’t going to be slower than him today. And it worked out.”

“It was a really incredible feeling,” Bluman added. “It’s really special not only because it’s the Hampton Classic, but because it’s McLain Ward on his home turf. To beat him today is definitely going to be one that I’ll remember.” 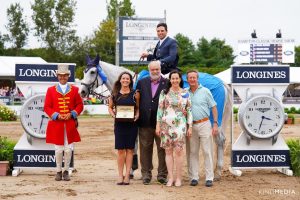 “He’s a super quality horse,” Ward said. “He’s always been very, very careful, and he’s a fighter. My team has that horse in spectacular form right now from preparing for the Olympics, where we achieved a dream result. It’s nice that he was able to return home and be fit and ready to go, which is a testament to all the care from our team.” 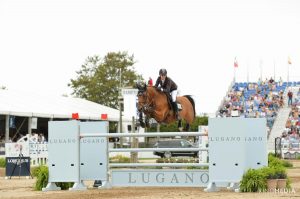 After his second-place finish in the Grand Prix, Ward won the $30,000 LONGINES Rider Challenge with a total of 538 points. Bluman placed second with 350 points.

Schuyler Riley (USA) rounded out the top three in both the Hampton Classic Grand Prix and the LONGINES Rider Challenge, collecting a total of 325 points. After finishing second with Katherine Gallagher’s Robin de Ponthual in Friday’s Grand Prix Qualifier, she piloted the 16-year-old Selle Français gelding to a fault-free time of 37.420 seconds.

“I got Robin after he already had a big career in the grands prix,” Riley said. “He came from McLain, so he knew the ropes a little bit. I always felt his scope and carefulness, and over the last two years, we’ve gotten to know and trust each other so well. He’s just a machine. I think he’s one of the best horses in the world right now.”

The 16-effort, 1.60m course designed by Ireland’s Alan Wade featured several rollback turns, a double combination, and a triple combination. In the jump-off, the turn from the Jaguar obstacle to the red fence before the final jump home was where Ward felt he made a mistake.

“No one had done the seven (strides) from Jump 1 to 2, which we knew was an option in the course walk,” Ward said. “I was 90 percent committed and I did it, but I did it late. Then I ended up going quite wide through the turn, and I just tried to be neat and efficient after that. When I landed from the last jump, I knew I’d left the door open.”

Although Bluman admitted he wasn’t thinking much during his round and was just trying to go as fast as possible, Gemma W answered every question he asked of her. “Gemma has been with us since she was five years old,” he said. “From the beginning, I knew she was very special and athletic. She wants to do the job, and she wants to leave the jumps up all the time. She’s scopey and careful, and I believe she has a great mind and a great heart.”

The Grand Prix was also a part of the Jump for JustWorld Program. For every clear jump over the Jaguar obstacle, Jaguar/Land Rover of Long Island supported JustWorld International by donating money to help fund a child to go to school for one year. By the end of the class, Jaguar donated a total of $10,000. 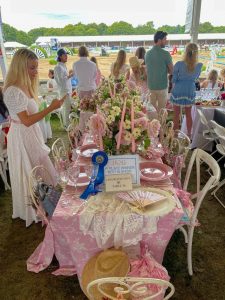