Audrey Gruss: A Philanthropist on a Mission to find the Cure for Depression

From the outside Audrey Gruss appears to represent the rarefied Palm Beach lifestyle that exists along ‘Billionaires Row’ living in an exquisite mansion filled with collections of Old Masters and antiquities which will one day be bequeathed to the Met.  But behind this façade of opulence is a determined philanthropist on a mission to discover the next Prozac and end depression.  Inspired by her elegant and artistic mother Hope, who suffered from depression, she created and funded the Hope for Depression Research Foundation in her memory 16 years ago, which is dedicated to researching and curing this silent and pervasive disease. 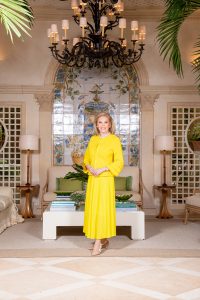 “My mother had struggled with depression for decades and she was first diagnosed with a nervous breakdown when she was in her early thirties, but it was really a major depressive disorder.  She tried various cocktails of medications and she was misdiagnosed for many years before she was diagnosed with depression. She and my father escaped from Lithuania after the war to flee communism and came to the US and started from scratch.  After my mother died at 84, I was bereft.  She as one of the most creative and wonderful influences on me and wrote poetry every day, but I always wondered why she never got total relief from her symptoms. Thirty five years ago my husband and I started the Audrey & Martin Gruss foundation and although we donated to over 200 charities I never felt that there was one particular area that really touched a nerve or was really totally mine, until one day I realized the subject that I could be most influential was right under my nose,” Gruss remembers.

While researching the answers to her mother’s illness Gruss discovered that the funding towards depression research was limited.  Seven of the top 10 pharmaceutical companies all stopped doing research 15 years ago in brain science because many of their patents expired and they just didn’t have the billions coming in. The government never really declared war on mental health issues or depression, yet an enormous amount of money given toward cancer research, and depression is like the cancer of the 21st century. 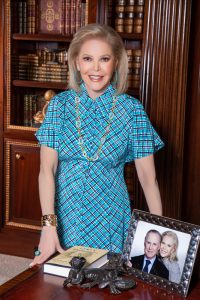 “We’re 50 years behind where cancer is. We don’t have government money significantly behind it nor private funding.  I focused on depression because that is the most common cold of mental health, and I thought if we can get answers to this, everything else will simply fall into place. My concept was to go to the top leading neuroscientists in each area to create the depression task force. That group of doctors agreed to work together and to share their information in real time together.   Previously doctors and researchers worked in silos and nobody shared their information.  And I thought if the doctors could share their research in real time and collaborate, you would get faster end benefits and results. Dr. Eric Nestler of Mount Sinai is the chairman of our depression task force, and he is the head of the Neuroscience Society of the United States.  In the last 15 years we have become the leading depression research organization that also covers the mood orders related to it – such as bipolar disorder, post partum depression , post traumatic stress disorder, and anxiety.  If we can identify the causes of depression and the cascades in the brain, we can discover new medications to treat it, which would be an amazing thing for the world. During the pandemic, the CDC in combination with the census Bureau did a research study which showed that 50% of Americans have some type of depression or anxiety and 18 to 20 million Americans struggle with depression during an average year,” says Gruss. 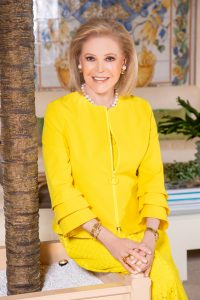 One of the biggest motivating factors behind the HDRF’s quest to find a cure for depression is that 35% of the people diagnosed with depression and related mood disorders do not respond to the existing medications such as Prozac which was discovered 60 years ago, yet there has not been any major new direction. “What we are working on is a major new category of antidepressant and we’re in clinical trials in two places- Colombia and Mount Sinai.  I’m testing a brand new category that is not based on serotonin but a completely different pathway in the brain,” proclaims Gruss.

IW:  With the pandemic shifting the way people are interacting socially, how do you think that depression will be tackled under the “new norm”?

AG: That’s an excellent question because one of the basic human needs that we have is social interaction with each other.  If you can’t connect physically and literally, connect by zoom or by phone, connect in whatever ways you can.  Return to the religious organizations that you’ve been with before. But I think what is very important are two things. The pandemic definitely created a high level of depression and anxiety. We know that 150 million Americans are struggling with it and wondering what they can do to help themselves.  The media has brought light to this issue and they speak about mental health- the importance of being aware of it, dealing with it, and seeking help to do something about it.  I think this will help people deal with the issue and some very positive things will transpire. This has been a silent illness and in the shadows for a long time. There are too many people that are struggling unnecessarily.

IW:  What do you think are the most important elements to maintain mental health?

AG: There are four pillars of mental health. The first pillar is nutrition, a balanced diet and a proper combination of your carbohydrates, proteins, fats and minerals. The second is sleep, and people must get at least eight hours to properly renew and refresh your body. Exercise is absolutely a must to get the body moving to balance the energy in your body.  The fourth is meditation or mindfulness.  Our brain is very plastic and it has been shown that meditation can really rebalance it.

IW:  What are some of your latest charitable initiatives with the HDRF?

AG: At our annual seminar and luncheon we have hosted celebrities such as Le Anne Rimes, Ashley Judd, Anderson Cooper, Brooke Shields and others who spoke about their own challenges and experiences in dealing with depression to raise awareness and take away the negative stigma of the disorder.  And we feel that if we can get celebrities to speak publicly about their own experiences with depression and mood disorders, they represent millions of people who don’t have a voice of their own.

I have also introduced two new scents to the Hope fragrance line that is sold at Bergdorf Goodman with 100% of the proceeds going back to the HDRF.  The line is inspired by my mother who used to mix her own fragrance combinations, and some of her favorite top notes were tuberose, lily of the valley, jasmine and gardenia.  Hope Sport is part of the lifestyle collection for the woman who loves to live in her athleisure clothes.  It’s energizing, very green and sporty.  The other fragrance is called Hope Night, a romantic sexy Oriental type of fragrance with vanilla, amber, and lily of the valley.

IW: What do you love about living in Palm Beach?

I think Palm Beach is one of the safest and most beautiful places in the world with a sense of serenity and calmness.   You can be as social or as relaxed and private as you want. Everyone respects that. It is almost a bubble that we live in because it is so safe and secure. It is also one of the biggest nonprofit communities that I’ve ever experienced because most people that come here have already accomplished something somewhere else. But younger people are coming to Palm beach also because of the better quality of life and all of the schools have waiting lists here. The cities are much more difficult to live in at this time. I do hope all the great cities revive and survive and come back in a strong way.

IW: What kind of philanthropic responsibilities do you feel like a family office should have?

AG:  I think it is a basic obligation of anyone who is fortunate enough to have wealth in their lives to have a sense of giving back, especially if we can make a difference to do something to better the world. I think that people should look inward at their lives and see what interests them and determine what is meaningful for them.  It is the most important thing that we can do for our own mental health. To be able to give provides a sense of happiness that you can’t get any other way. 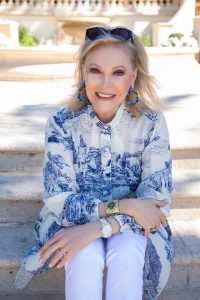 IW: What would be the legacy you would like to leave behind?

AG: I would very much like to be associated with the work that I’ve been doing in mental health and to find a cure for depression. That would be a big dream of mine. I never want anybody to have to go through what I saw my mother go through. We, as her children, had to experience that sadness and see a person struggle just to get through the day.  If we could find a cure for depression or even some medications that help everybody, that would be something I would be very proud of as a legacy.