by Kyle Edward
in Wealth
0 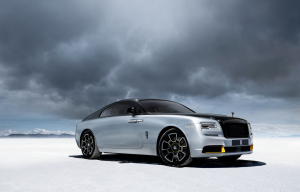 The prestigious Rolls-Royce brand is all about celebrating heritage and tradition while at the same time embracing the newest and most cutting-edge automotive technology and integrating it into that timeless classic build. Rolls-Royce is coming out with a new collection of Wraith and Dawn Black Badge models that they are referring to simply as the “Landspeed Collection.” This collection is built to commemorate and celebrate the achievements of British engineer Captain George Eyston in his land speed record-breaking vehicle Thunderbolt, which was originally powered by 2 Rolls-Royce R V12 engines. 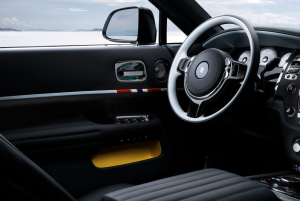 Starting on the inside, the interior design is meant to help drivers and passengers think of the place where Eyston made many of his greatest achievements, the Bonneville Salt Flats in Utah. It was there in 1937-1938 that Eyston pursued his most famous land speed records. As you might expect from a Rolls-Royce, the key to the story is in the details of the new Landspeed Collection build.
First,the interior fascia reflects the location, engraved to reflect the unique texture of the salt flats. Second there’s the steering wheel, the detail on which is showing a depiction of the dark track-line that was left on the surface of the salt flats for each of Eyston’s key runs to break the land speed record. His car, Thunderbolt, was so heavy and so fast that it was incredibly difficult to keep straight and safe when dealing with speeds of 350+mph. To that end, they painted the black lines on the salt flats to help Eyston keep Thunderbolt in line. That track line in the Landspeed Collection goes from the steering wheel and runs continuously up the centerline of the driver’s seat.
Looking at the front tunnel, you’ll see laser engravings of the three record speeds that Eyston’s car Thunderbolt achieved during its time on the salt flats, along with silhouettes of the vehicle, now lost to the ages, of course. Next, on the driver’s door there are subtle inclusions of color detail that you might ignore at firstas simply an aesthetic choice. In fact, these colors also have a meaning since they are the colors of the ribbons that Eyston received as honors during his life.
Finally, lifting up your head to regard the Starlight Headliner, you might wonder what makes it so special since other Rolls-Royce models have this feature. Or do they? The Landspeed Collection is not simply an arbitrary set of stars, but specifically the stars of the night sky on September 16, 1938, the day on which Eyston set his third and most lasting land speed record of 357.497-mph.

A Limited Edition Built for a Legend 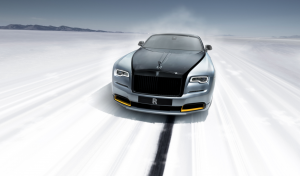 Anyone interested in getting their hands on one of these Rolls-Royce Landspeed Collection models may be somewhat disappointed to know that production is not just limited, but those models that have been designated for production have already been allocated to customers. Rolls-Royce are limiting production to just 25 in the Dawn Black Badge form, and 35 in the Wraith Black Badge form.

But even if you can’t share in the ownership of these cars, the attention to detail throughout the entire build is something to admire greatly. Above we mentioned several of the interior detailing points, but it doesn’t stop at those examples. In truth, every inch of the Landspeed Collection cars acts as a tribute to Eyston and his lifetime achievements.
When you look at the bumper inserts on both the Wraith and the Dawn models, you may notice bright yellow accents. An aesthetic design choice? In fact, these inserts are there to reflect the storyof Thunderbolt and how the vehicle was at first left unpainted. Why paint it, right? This wasn’t a show model. In fact, the lack of paint proved a serious problem when it came to getting accurate timing of the land speed attempts. The photo-electric timing devices were unable to properly pick up the polished aluminum body as it ran against the pristine white surface of the salt flats.
The solution? Eyston created a delightfully elegant and straightforward answer, which was to paint Thunderbolt with a huge black arrow with a yellow circle. That explains the origin of the yellow and black bumper inserts, as well as the special design of the interior analog clock. The clock features yellow and black details, including black-tipped hands inspired by that hugeblack arrow on the exterior. 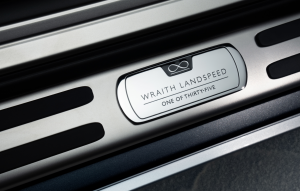 With subtle but stylish interior and exterior detailing, the Rolls-Royce Landspeed Collection serves not just as another great set of cars added to the legacy of this luxury car brand, but also a fitting tribute to a great man who took Rolls-Royce engineering prowess to new heights through the employment of their engines in that legendary car, Thunderbolt.You are likely not one of the lucky few allocated one of these beautiful cars, but at least there is still plenty of Rolls-Royce beauty to go around
Tags: carsKyle Edwardluxury carsrolls royce landspeedRolls-Royce
Previous Post