How the Zero-G Experience Is Mainstreaming Space Tourism

by Davis Richardson
in Lifestyle, Travel
0

The media narrative is that only billionaires can experience space.

Jeff Bezos and Richard Branson recently became some of the first private citizens to orbit space’s outer edge in their company planes. But these types of experiences will become more affordable to everyday people as the industry develops, according to executives on the cutting edge of this emerging sector.

“All of the attention right now is on Jeff Bezos and Richard Branson. But there are more affordable alternatives to experiencing weightlessness and space conditions without building multi-billion dollar companies,” Zero Gravity Corporation’s CEO Matt Gohd tells Impact Wealth.

Founded by veteran astronaut Dr. Byron K Lichtenberg and NASA engineer Ray Cronise, Zero Gravity Corporation takes passengers on parabolic flights mirroring the conditions in space. A trip aboard G-Force One runs $7,500, and includes breakfast ahead of liftoff, and a champagne toast post flight. Once on the flight, passengers experience weightlessness as the pilots fly acrobatic movements called “parabolas.” Unlike simulated experiences, everyone onboard the aircraft experiences true weightlessness and zero gravity conditions.

“Our clients are not just the ultra wealthy,” continues Gohd. “They’re families experiencing adventure tourism for the first time. We’ve also worked with leading research scientists and entertainment networks such as National Geographic and Discovery Channel.”

As the first mover in offering the general public these experiences, Zero-G became the first commercial 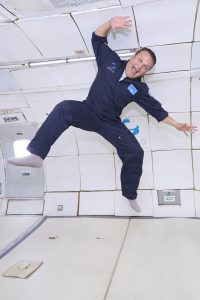 company to gain permission from the Kennedy Space Center to use their shuttle runway and landing facilities to operate its flights. Stephen Hawking, Martha Stewart, and Buzz Aldrin are just a few distinguished passengers who have boarded Zero-G’s G-Force-One plane, a modified Boeing 727-200 built with the same precision as NASA grade vehicles.

While Zero-G has thrived over the past decade, Gohd anticipates an increase in demand as pioneers like Bezos and Branson continue bringing renewed interest to the final frontier.

“If someone is going to space for the first time, they’re going to need to know how it feels before boarding a spaceship,” quips the CEO.