With a moniker like “The Prince of Luxury,” it’s clear that Noel Shu is no ordinary entrepreneur. This millennial self-made millionaire has accomplished more in business than many do in an entire lifetime, already boasting a client roster that includes billionaires, celebrities and royal families. So keen is his business acumen and venerable his reputation, Shu’s clout earned him a VIP invitation to the last U.S. visit of China’s president, Xi Jinping, alongside other revered titans of industry the likes of Bill Gates and Jack Ma.

Today, Shu brings his wealth of expertise and impeccable panache to the global luxury goods market where he spearheads ultra-super-premium products such as the finest champagne, wine and spirits as well as extraordinary multi-million dollar jewelry and timepieces of unparalleled quality—all targeted to discerning consumers on both sides of the Pacific, including China’s elite, who demand the absolute best in taste and quality. 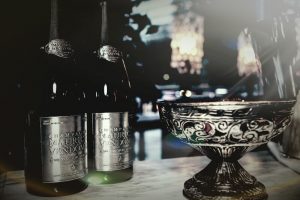 Aside from having served as a managing partner at the extolled beverage agency Prodiguer Brands (perhaps best known for selling the most expensive single bottle of Champagne in the world, Goût de Diamants, for a staggering $1.8 million), Shu’s own company, Un Joyau Majestueux, recently launched its own new wine brand, Majestic Ruby. This exciting new expression made its world debut at the 2017 Oscars Celebrity Luxury Lounge at the Beverly Hilton Hotel Penthouse where it was reportedly celebrated by an array of Hollywood A-listers.

Further demonstrating his prowess in the world of fine wine, Shu is also a lauded sommelier and one of the world’s leading experts on Chinese wine culture. In fact, he authored the book, “China Through a Glass of Wine,” which offers a fascinating examination of China’s burgeoning wine industry from an insider’s perspective. From China’s rich cultural history to its political climate, this title takes readers on a captivating journey through the country’s viticultural victories and hopes for the future.

Another of Shu’s latest ventures is a film production company, 1768 Entertainment, which brings Shu’s love of luxury to the entertainment industry in the form of compelling documentaries, stories inspired by real events and suspense tales with an Asian influence.

Below is some enlightening Q&A with this millennial mastermind through which he offers insider perspectives and business advice of note for those who like to roll like royalty (or want to look like they do). Image is everything as they say.

What are the highest end luxury consumers looking for and how do luxury brands appeal to those needs? Or, are brands missing the mark? What brands are getting it ‘really’ right, and how?

The highest end luxury consumers are looking for craftsmanship and before anyone says anything about how all luxury brands stress craftsmanship and quality above all else, they do…not really. It has to be understood that for a luxury brand to appeal to the highest consumers, they must not yield to public opinion. They must not follow the market. They are supposed to set trends and not just think only about profit margins. Because when you only think about profit margins, you’ve now become a business. That’s the worst I think that can happen to any luxury brand, becoming just a business. A classic example we can look at is Rolls Royce. Since its founding, Rolls Royce has always stayed at the top of its game and never for the sake of making a few extra bucks has it compromised on its mission: designing an experience. Rolls Royce doesn’t care that most people can’t afford its cars. They don’t care and if anything, they will build more expensive cars, with bigger engines and more unaffordable price tags. That is what the highest end consumers are looking for an uncompromising brand.

It’s difficult enough to become successful in a single industry but you have enjoyed tremendous success across many luxury sectors from wine and spirits to custom jewelry design and even film production. What is your advice to other entrepreneurs interested in pursuing success in multiple trades, inside or out of the same overarching industry?

Many people have always stressed that you should take your time to slowly build upwards. That is absolutely true. However, what they fail to tell you is that once you have reached a certain point where you are comfortable with what you have, it’s time to rev up the pace. Everyone should have a sector or two where they’ve made a name for themselves – their claim to fame, if you will. The reasoning behind this is that you are now experienced at running a business. Although there might be differences between industries, the general concept stays the same. The other is for any start up or new business you get into, there will be a lot of down time. This comes from perhaps getting the necessary licensing and permits to do a build out on a store, waiting on designers and architects to draw up blueprints or just finding the right field to get into. There’s so much in between time that it’s crazy if all you’re doing is sitting on your hands doing nothing but waiting. This is why many people have always stressed having a job while you’re working on a startup. Two important things are first, to have cash flow and the second, quite frankly, is that you don’t need to invest that much time all the time.

As one known for investing in luxury brands, what do you look for when deciding whether or not to engage?

Most investors can be categorized into three groups: the strategic, the emotional and the mixed. If you’ve ever watched an episode of “Shark Tank,” you can catch a glimpse of just what is going on in an investor’s head. Although it’s fun and amusing to watch, there’s quite a bit to pick up on. Having said that, an investment is seeking a profitable return from a capital contribution so sales are without a doubt important but even more so is future profit. Savvy investors always ask, “What is the actual potential of this particular investment?” To diversify, I invest both long and short term so I have a never ending revenue stream. For instance, on the one hand I invest in cash positive businesses that will probably be around in five to 10 years. On the other, where a lot of your whales are, is short term investment in hopes of cashing out everything in a couple of years, whether that company gets acquired, sold or IPOs. This is actually less headache overall but requires a bit of capital as well as the right connection to grow the company the right way.

Having debuted your own wine brand at the Pre-Oscars Celebrity Luxury Lounge, and based on those results, do you feel these kinds of celebrity-driven showcase events are an effective marketing and business development strategy for luxury goods? Are celebrity affiliations that important for a luxury brand launch?

For any product there are always two groups of people you should appeal to because only then will you be successful. The first and most apparent are celebrities. No matter what, the rest of the world is always keeping close tabs on those who are rich and famous. In order to emulate them and be like them, many go out of their way to get what they have. I will make a bet that if someone famous uses an unknown brand or product, within 24 hours you will see the sales of that product go up. It’s just what happens.

Second, which is equally as important, are the critics or experts on whatever it is you’re selling. No matter how much fanfare or glitz a product gets from being in the limelight, in order to stay there and have continued success the “product” itself is what keeps it there.

To be simple, if a celebrity uses your product, sales of that product that day could shoot up to 5000 units in day from 500 units but fall back to 500 units if it’s mediocre. However, to have that product stay at the 5000 unit level or even rise, “the proof really has to be in the pudding.”

Having worked professionally, and networked with billionaires, celebrities and even royalty, how were you able to make those connections and what advice would you give to businesses/entrepreneurs seeking high caliber business associates?

There’s no clear cut way to get these connections. It’s not as simple as flipping through the yellow pages looking for billionaires and celebrities and just calling them up. I think it’s more about focusing on what you’re doing and let everything else come by itself. There’s this growing popularity surrounding sushi and if you’re a big sushi connoisseur, you’ve heard of Jiro’s Sushi, arguably one of the best sushi restaurants in the world with ranking of the coveted 3 Michelin Stars. People from all walks of life have gone, from your average Japanese citizen to the President of the United States. Did you think when Jiro embarked on his journey that he imagined the type of success and attention it would garner? No. So what does that mean? It means focus on yourself and what you’re doing. Be mindful of your surroundings, who your clientele are, what people say about your products and trudge through. You’ll be shocked at the result.

Never one to rest on his laurels and even amid a diversity of endeavors, Shu continues to raise the bar for himself professionally and personally.  Whether it be as an active investor looking for the latest innovation in the luxury and tech space or, despite his jam-packed schedule, his current pursuit of an Ivy League Master’s degree at Columbia University.  Clearly this good life connoisseur turned luxe market mogul will continue making an impact on the numerous high-end industries for many years to come.