by Yvonne Beri
in Interviews
0 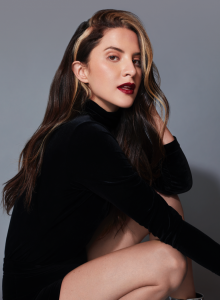 Though only in her 20’s, it may seem like she’s figured it all out, but she’s only just started…

As a Nextgen daughter of Gina Diez Barroso and the great great granddaughter of the legacy Televisia media family – Ivana De Maria (born Ivana Maria Moreno-Valle Diez-Barroso) is one of 5 siblings making her own mark and following her heart, which seems to run in the family.  The family is known for never taking no for an answer and seeing unlimited possibilities, making the world better, and empowering others to do the same.

Born in San Diego and raised in Mexico City, she attended high school at the Institute Le Rosey in Switzerland and then completed a bachelor’s degree in business administration with concentrations in Finance and Law at Boston University, MA. Following her passion, she attended summer intensives at the Stella Adler Studio of Acting in New York. Ivana is an accomplished producer, actress and tech entrepreneur. She has starred in a number of films as well as TV shows. She was a producer on the Netflix television series MONARCA and is an Executive Producer for an upcoming Limited Series based on the life of renowned journalist Oriana Fallaci. Ivana is also the Founder and CEO of StoryPlace, an empathy-driven platform where people around the world share stories and turn their stories into content. The platform has over 30,000 active users in 92 countries around the world.

Even kids of business moguls have many of the same experiences as everyone else. They go to school, make friends, have interests, think about their careers and life path, what’s your story?

Well, I was born in San Diego, and grew up in Mexico City, right until I was 15.  Even though the population of Mexico City is about 22 million people, it’s actually a very small society and very traditional. It inspired me to want to explore the world to have different experiences. The plan was for me to go to Switzerland for a year and then come back after the year ended, but I never went back. I stayed for three. I graduated high school in Switzerland and then went on to Boston University for my Bachelors Degree. I studied finance and law, for the sake of learning.  It wasn’t necessarily the career I wanted to pursue after graduation. This was very confusing for pretty much everyone around me at the time. I would confuse them even more, because during the summers, instead of doing internships, like all my classmates, I would go to acting school. Everyone, except for my family, was like, “What? Why are you doing this? It’s a waste of time”. They couldn’t understand that I genuinely just wanted to learn for the sake of learning. Besides that, finance and law are two things that affect your day to day, whatever you do.

So, what does a person with a bachelor’s degree in Business Administration with concentrations in Finance and Law from Boston University do after they graduate?

I moved to LA to pursue acting full time, or so I thought. The acting world, or system, is old (outdated) and has complicated rules that make no sense at all. To be considered for work, you need a reel, but you can’t get a reel unless you’ve worked, so it was constantly like which comes first, the chicken or the egg? I hated it. I also really don’t have the personality to be waiting for people to call me to give me an opportunity. I needed to be proactively doing things.

What was your approach to making things work for you? 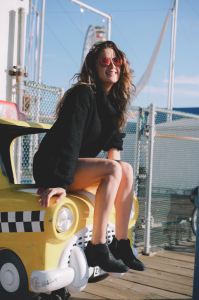 I sat down, and I started thinking, and this is honestly how I’ve pretty much addressed any unknown factor in life, by using logic of some sort. “What do I want to say? What character do I want to portray?”  I started writing and writing, a name, an age and created a journal of this character. From there, the story was created.  Then I needed a camera and someone to operate it as well as a costume designer. I started learning all of these things, without realizing I started producing.   Just figuring stuff out and putting it all together meant you’re a producer.

I produced two short films, which I wrote and acted in. They did great at festival circuits. I was so happy.  It was great taking ownership and not waiting for an opportunity.

You taking ownership and not waiting for an opportunity is really inspiring for anyone at any age or place in life. What did you do next being that you were the new kid in LA?

So, I started to schedule meetings for the sake of meeting people.  Whenever somebody would suggest that there is someone I should meet, or you would get along so well with this person, I would always say “put us in touch”.  I wouldn’t even wait a minute. I feel like when an opportunity is presented, you should follow through immediately. Because I didn’t have an agenda, people were very confused. At the end of the meeting, they would say, “what can I do for you” and I would respond, “nothing really, it’s great to meet you and thank you for your stories.”

From those meetings came the most amazing opportunities. One of them was a journalist my mother knew, Giselle Ferndandez.  She had the rights to a book by Oriana Fallaci, an Italian journalist and an amazing woman, I fell in love with Oriana, her story, the book, and Giselle. When I initially met my mom’s friend for lunch, I was thinking it was going to be one of those, “if you need anything in LA give me a call” meetings.  Instead, it turned into a four hour lunch.

Was that how the HBO TV series about Oriana Falacci came about?

Yes, that’s how I partnered on that project and initially we were working on making it a feature film. But we were thrilled when we got a call from HBO asking to hear the pitch as a possible TV series. I thought producing HBO dramas would happen at the end of my career, it was just so surreal.

Then another reality check, I had no manager, no agent, no writer, like nothing of what supposedly you need in entertainment. We only had the story…

How did you prepare for the meeting with HBO?

We had been talking about this story so much and going over our take on the story. Basically, we walked in and told the story to the two heads of drama, at the time, and they absolutely loved it and a week later they called and said, great, we want to do it, we want to make the series. You’re both on as executive producers.

It all happened so fast.  What was that like 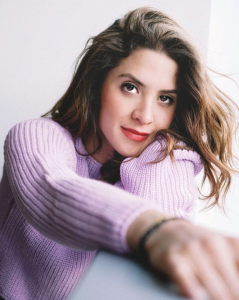 It was very surreal. Everyone around me kept saying, “oh that doesn’t happen”, you’re so lucky, this is impossible blah, blah, blah. Initially that made me very insecure about what I had accomplished. Was this all luck which essentially says, “imposter syndrome all the way”.

Then when I actually understood, this is not how things happen, but it did happen, something must be changing?  It was becoming clear to me that stories were the new currency.  If you have a good story and you know how to tell it, along with perseverance, that seems to be enough. I said, “oh my God, there’s another way”.  I don’t need to give up on my dream of taking stories to screens. I can approach it a different way.

Interesting, stories are the new currency?  What was your new path?

I started finding stories instead of finding agents and managers. I said to myself, “Okay, I want to find more stories”.  I asked around, I searched online, I couldn’t find normal, organic, real, authentic stories. All I could find were journalistic types of stories. Social media has a lot of content, but has very little substance, depth, or truth, right? That was pretty much it. I addressed the unknown factor, by using logic, which got me thinking.

Is that how StoryPlace was born?

Yes, it was. I was challenged when I couldn’t find stories easily, some sort of a database of stories, it was so simple in my mind. I started thinking, if I could find what I am looking for, what would it look like?

Then it came to me, because we live in a digital era I needed a digital platform. It was the path to explore. It would have to be a safe space where people would dare share truth, their passions, tribulations, and joys. In its technological bones it would be something like a social media platform, except that people who dare be themselves.

I kept thinking, why are there so many social media platforms, and yet, none of them have true or actual stories?  I decided I would reverse engineer these social platforms and create a platform that would eliminate all the factors that I felt were impeding people from sharing real stories.Finding a developer was the biggest challenge because the right developer is very specific to each project. There is this huge gap of translating between the visionary entrepreneur founder and the technology developer that still needs so much translation. Trial and error and many learning experiences later, I finally found the right developer.

So how do you summarize “Storyplace”?

After realizing the importance and the impact of connecting people through stories, StoryPlace came into being.  I am a firm believer in promoting empathy in the world, and I do that through stories. Storyplace opens the doors for the world to tell their stories, and to give everyone a chance to take their stories to the big screens. On a practical level, it is a social platform where people around the world share stories with each other, in a safe, empathy driven community, that appreciates vulnerability and celebrates our differences as human beings. We also offer resources and tools for people who want to turn their stories into content, whether that is film, tv, books, or podcasts. The stories being told across content are meant to represent us all, so we should all have the chance to tell those stories.

Which philanthropies do you support ?

I am on the board of Justice For Migrant Women and San Fernando Valley Children Refugee Center.